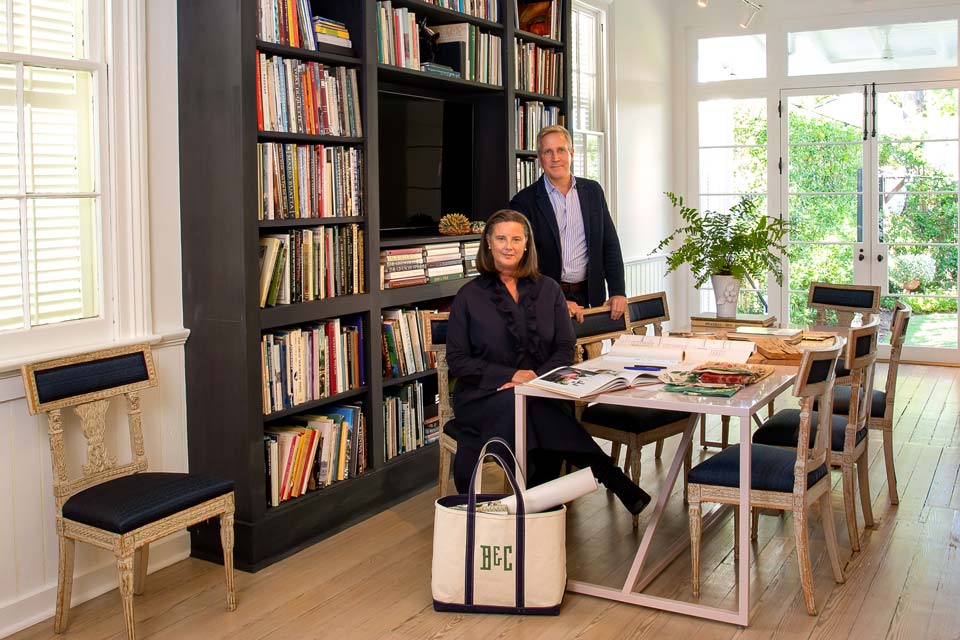 BILL BROCKSCHMIDT AND COURTNEY COLEMAN bring to their work a focus on traditional detailing, proportion, materials, and craftsmanship in both architectural elements and in furnishings. Whether designing a stylish library in a Park Avenue duplex, detailing en-suite slipcovers for a French Quarter carriage house, or specifying intricate upholstery details for an important early wing chair in a Pennsylvania horse farm, the two emphasize appropriateness and clarity in their work and bring a modern sensibility to historical references. Their resulting interiors always reflect the clients’ own personality and lifestyle in a creative, sophisticated manner that is both timeless and unexpected. The style of each project may be unique, but their rooms are often characterized by interesting color choices, dynamic and balanced furniture plans, and a thoughtful mix of antiques, custom furniture, and contemporary elements.

Bill and Courtney formed Brockschmidt & Coleman, LLC, in February 2001 in New York City. In 2019, they opened their southern design studio in a vintage double shotgun house on Magazine Street in New Orleans.  A talented, capable staff in both cities coordinates projects in locations from Maine to Florida on the east coast and throughout the south in addition to California, Bermuda, Sicily, and Croatia.

Their work has been featured online and in print in Architectural Digest, Chairish, Departures, Elle Décor, Garden & Gun, House Beautiful, Lextalks.com, New Orleans Homes & Lifestyles, Period Homes, Quest, Southern Home, Traditional Home, The New York Times, The Wall Street Journal, 1st Dibs Introspective Magazine and on HGTV. Brockschmidt & Coleman has been included on Elle Décor’s A-List annually since 2012. In addition, they have lectured at Winterthur, the Institute of Classical Architecture & Art, the American College of Building Arts, University of Notre Dame, and Zone Chelsea. They have also participated in a number of panels, among them Southern Style Now, New York Design & Decoration Building’s Spring Market, What’s New, What’s Next at the New York Design Center, and a Chairish Podcast.

Their dramatic rooms and settings created for design-oriented philanthropic events have been well received and include The Orchid Dinner to benefit the New York Botanical Garden, NOLA’s Art in Bloom with proceeds going to the New Orleans Museum of Art and the Southern Style Now Showhouse benefiting the Historic Savannah Foundation.

The two originally met volunteering for the Institute of Classical Architecture & Art where they are Fellows Emeritus for their service organizing public programs and travel programs for many years. Courtney served on The Decorators Club’s Board of Directors and as Chair of the Scholarship Committee and in 2017, she established an acclaimed residential competition scholarship. Bill and his husband, Richard, have opened Sud, a storefront boutique within the New Orleans building that carries a curated selection of antiques, art, and contemporary crafts from or inspired by Sicily. The lofty rooms and garden provide an opportunity for B&C and Sud to host openings and special events.